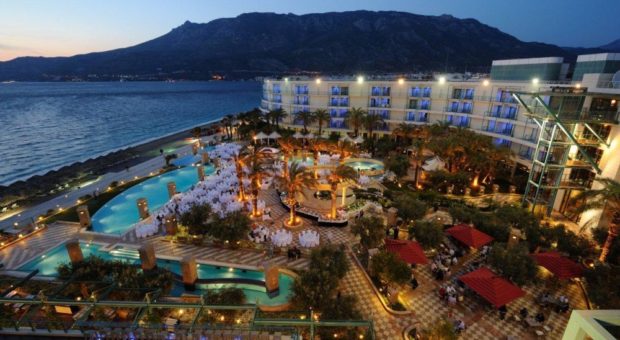 The 45th president of the United States, Donald Trump, set to enter the White House on January 1 is also looking into expanding his business activities by adding the Club Hotel Casino Loutraki in Greece to his company’s roster of interests.

The casino, which was put up for sale some two years ago by its Israeli owners — Queenco Leizure International Ltd and Club Hotel Investments (CHI) — has been seeking buyers for quite some time now with Trump Entertainment Resorts initially expressing interest together with Paris-based entertainment group Groupe Partouche in May this year.

After a series of failed attempts in Atlantic City, Trump Entertainment Resorts appears to be returning to the casino business. According to Eleftheros Typos on Sunday, Trump Entertainment Resorts had also expressed interest in the past in constructing a casino at Hellenikon, Athens’ former airport complex, which now awaits an an eight-billion-euro project set to develop into a multi-purpose hub complete with metropolitan park, shops, offices, sports and conference facilities, luxury hotels, theme parks, museums, malls, cultural venues, health centers, educational and research facilities and marina.

It is noted that Donald J. Trump is no longer involved in the company.

Groupe Partouche meanwhile, wants to expand the Loutraki venue into a casino city to include exclusive facilities for the accommodation of high-income players as well as infrastructure to host international poker tournaments.