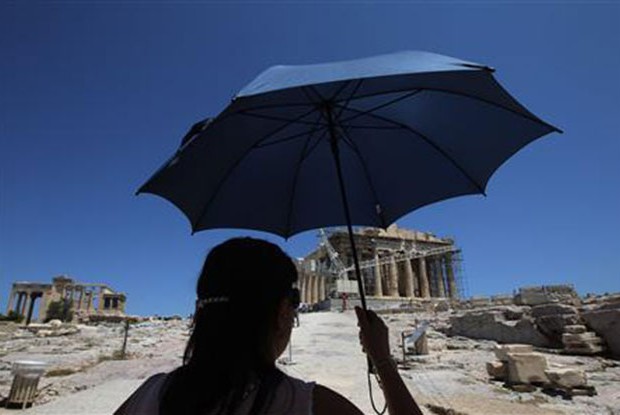 Strong spending by foreign visitors widened Greece’s current account surplus in July, confirming expectations that a bumper tourism season will help ease the debt-laden country’s recession this year.
With domestic demand, investment and industrial output suffering amid an austerity-driven slump, spending by foreign visitors is becoming the only growth driver for the economy, which is seen shrinking less than an initially projected 4.2 percent this year.
Tourism receipts, the country\’s biggest foreign-currency earner, rose 12.3pc year-on-year to €2.36bn (£2bn) in July, central bank data showed on Wednesday, showing strength for a second consecutive month and boosting the outlook for a balanced current account down the road.
As a result, the current account balance, a key measure of economic competitiveness, showed a surplus of €2.73bn from €508m in the same month last year.
Greece\’s current account deficit had swollen to 15pc of gross domestic product in 2008, highlighting its lack of competitiveness.
The International Moneytary Fund expects it to shrink to 0.8pc of GDP this year, mainly as a result of austerity-fuelled, six-year recession which slashed imports.The July reading was also helped by an inflow of €1.5bn from the European Central Bank, the first tranche of profits on Greek government bonds from its so-called Securities Markets Programme (SMP).The latest inflows brought total tourism revenue in the first seven months of the year to €5.68bn, a 15.4pc rise compared with the same period last year, when fears of a Greek euro zone exit kept tourists away.The local tourism industry is forecasting a 10pc rise in tourism receipts for the full year to €11bn, expecting more than 17 million visitors.Hoteliers, restaurant owners and tourism businesses have slashed prices and upgraded services to weather the crisis and lure more visitors.
A better mix of visitors – including those who stay longer and spend more on average, such as Russian tourists – is also helping.
The number of Russian visitors, who usually spend more than Germans or Britons, has risen 34pc, official figures for the January to May period have showed.