Located in the Ioanian sea of Greece, The Greek Islands are known as the Echinades, were first spotted by the Emir when he moored his super-yacht in the turquoise waters off Ithaca, and liked what he saw. That was four summers ago and finally after 18 months of red tape he secured these jewels of Greece for a mere 8.5 million euros.   According to the Guardian newspaper,  “When the royal eventually got off the yacht, he inquired about the pine-covered chain as he strolled about Ithaca in sandals and shorts.” 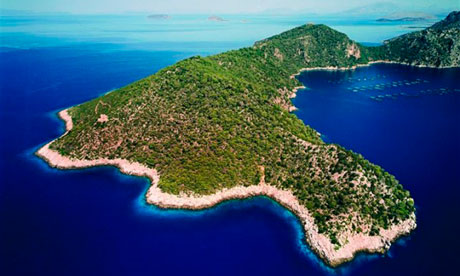 The article went on to say after initial talks for the Emir to invest 5 million euros in Greece 3 years ago came to a halt after classical Greek political delays.  Last month however, the Greek prime minister Antonis Samaras, rekindled interest for Greek real estate investement when Qatar signed up to take part in an international tender to develop Athens’ former international airport at Elliniko, one of the most sought after slices of real estate in Europe.  Click here to read the full article as appeared in the Guardian