Greek carrier Aegean Airlines has been granted the approval of the European Commission to buy rival Olympic Air.

The European Commission’s decision was announced on 9 October.

According to the Commission’s in-depth investigation, Olympic Air would be forced to exit the market in the near future due to financial difficulties if not acquired by Aegean.

“It is clear that, due to the on-going Greek crisis and given Olympic’s own very difficult financial situation, Olympic would be forced to leave the market soon in any event,” the Commission’s Vice-President in charge of competition policy, Joaquín Almunia, said.

“Therefore we approved the merger because it has no additional negative effect on competition,” Mr. Aluminia added.

Furthermore, the Commission confirmed that the number of routes served by both Aegean and Olympic has decreased substantially over recent years.

The Commission had blocked Aegean’s previous attempt to merge with Olympic in 2011 and since then the number of overlapping routes serviced by both carriers had been reduced. 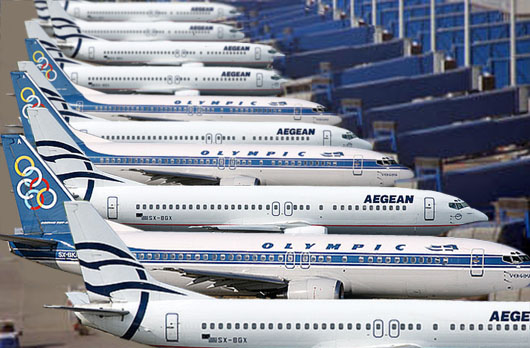 The market investigation has revealed that entry in the immediate future by other airlines is unlikely on any of those routes.

Furthermore, the market investigation has confirmed that there is no other credible purchaser other than Aegean interested in acquiring Olympic.

“The Commission has therefore concluded that any competitive harm caused by Olympic’s disappearance as an independent competitor is not caused by the merger,” the Commission said in an announcement.

Aegean Airlines and Marfin Investment Group (MIG) have agreed on the 100 percent sale of Olympic Air to Aegean for 72 million euros.

The former state carrier Olympic Air has been owned by Marfin Investment Fund since it was privatized in 2009.

Greece Wants To Abolish Entry Visas For Russians Next Post